Once again, as with Memorial Day, we’re in the midst of a 3 day holiday weekend. Just like the last one, it’s predicted to rain most of it. It’s been a roller coast beginning to our summer. Earlier this week is was unseasonably hot with multiple days in a row where the temperatures were in the mid-90’s. Now it’s been two days of steady rain with highs only in the mid-60’s. I even lit the basement stove for a few hours last night to help dry out the basement environment.

It’s makes me grateful I upgraded the lawn sprinkler controller last year. Until last year I had a pretty hard-to-use controller with knobs and switches that just did whatever time schedule you asked for. This new one is “smarter”. I can control it from a smart phone and it knows the weather conditions. So when we had our heat wave, it watered extra long while these few days it’s skipped the redundant watering.

Among my folks and siblings, this is the season of birthdays. My late mom’s birthday was June 11th while the last family birthday is July 31st. There’s six of us in that time span.

My birthday was a few days ago, but I kept things low key. I worked that day but did enjoy breakfast with Timothy at RiverHouse Cafe and later dinner with Abby, Ryan, and the Boyz at Sake House. Last night we continued the celebration with Claire, Luke, and the Boyz at TGIFridays, using a gift card sent by my Dad. 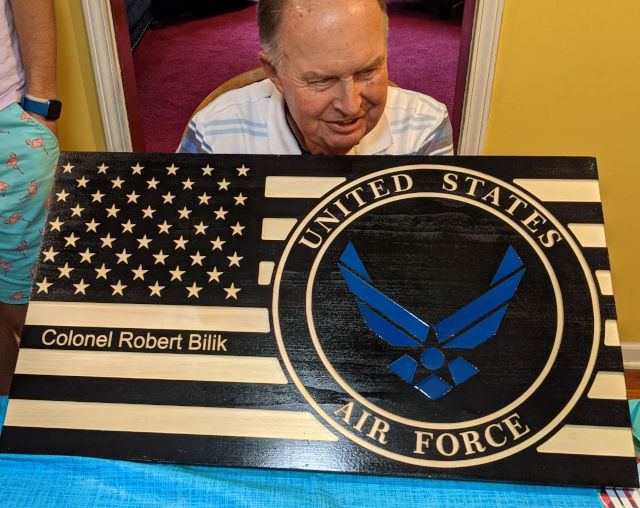 Dad showing one of his birthday gifts

Last weekend I flew solo to Chicago/Midway to enjoy time with my siblings and honor my Dad’s 80th Birthday. Such a milestone!! I really enjoyed that on this trip I saw all three of my sibs and their kids. I also made small trips to see my cousins Mark and John, whom I was close to as a boy, but we all got caught up in married and family life. Of course it didn’t help that I’d moved to the another corner of the country. 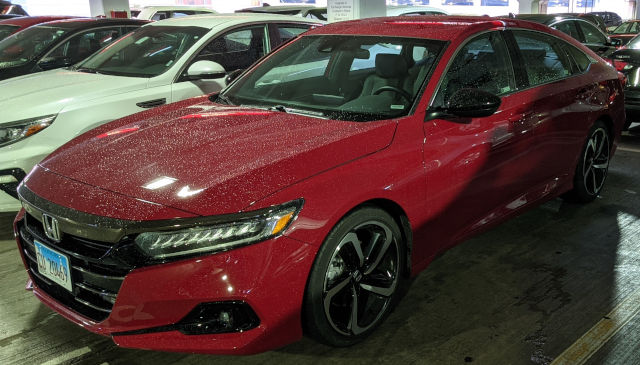 My Rental Car in Chicago

Besides seeing family, I was glad that my flight out – although a 5:45am flight out of Manchester – went smoothly and my rental car was auto-upgraded to a new Honda Accord Sport with nice wheels and an arrest-me red paint. The only significant trip snafu was that as I was checking in my bag in for the flight home, there was no pilot ready, so my already-an-evening flight was delayed an additional three hours. My head hit the pillow back home at 2am Monday morning. Since it was still in our NH-unusually-warm period, I used my car’s abilities and put the top down when driving home from the airport to help make sure I was less likely to get sleepy behind the wheel at that hour.

After a fair amount of screenings, consultations, and general hurry-up-and-wait, Timothy finally had the surgery to insert the BAHA implant. We both got up at 4am that morning, arrived at Concord Hospital at 5:45am, but he didn’t get wheeled into surgery until about 7:30am. It’s an outpatient procedure that took a couple of hours with an extra hour or two to recover from the anesthesia. He had some strong pain meds the first 24 hours, but soon backed off to over the counter pain killers for another couple of days, and since then has been fine. 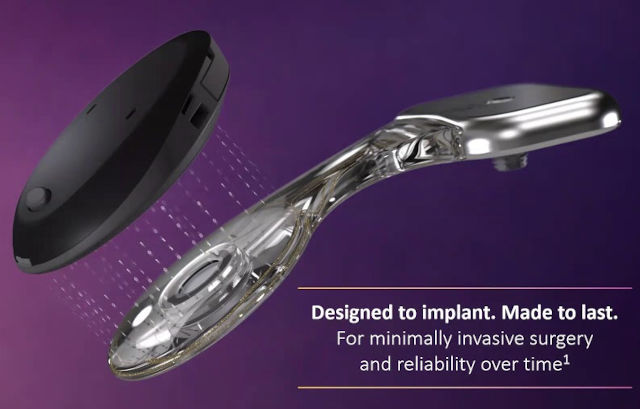 Because of the meds involved, Timothy was not to drive until after the 3 day followup exam in Concord, which I drove him to. That was a nice morning for a Father-Son drive! Yes, it’s almost an hour each way just for a fifteen minute “yep, looks good” appointment, but the weather and back roads to/from Concord made it worth the while.

There will be a two week followup this week, but the exciting appointment comes in early August when he’ll get the final approval from the surgeon and that same afternoon he’ll be fitted by his audiologist with the external sound module. In theory that’s when he’ll hear in stereo with some decent quality. The implant will convert the digital signal from the external sound processor and directly drive the bone adjacent to what would be his ear canal. The external processor should do good equalization so that his frequency response is relatively flat and wide like most hearing. I am so anxious and excited for him.

I’d mentioned earlier our visit to South Dakota was our first experience of a “normal” Mass back in April. Our Opus Dei gatherings had gone back to normal shortly thereafter. Some weeks ago the Bishop of the Diocese of Manchester recommended all NH parishes re-open to normal operation while maintaining means for those who are still cautious and want remote ministry options. While I was in Chicago last weekend, I attended Sunday Mass with my Dad at St. Cyprian parish. That’s where I was formed in my youth and received many of my first Sacraments (1st Communion, Confession, Confirmation, and Matrimony). I guess it was one of their first “open” weekends as several who attended mentioned how nice it was to actually see ol' friends who’d been hidden behind a mask for about a year.

My only concern at this point is that there are rumblings about variants. As I jokingly say, “Virus is gonna Virus”. Mutations, it’s what they do. It has a feel like last summer when there was talk of a “second wave” and just when things looked promising, the numbers from the new PCR-based testing kits – with their cycle counts over-amplified way beyond recommended amounts – caused a “case-demic” and things reverted back to anti-social isolationist behavior.

Luckily such fears will be mitigated for Tim while he’s in South Dakota. The governor there never locked down the state or made declarations of “essential” vs “non-essential” businesses. Their health outcomes were comparable to neighboring states but their local economy thrived. That should insulate him from the dramatic “learning from your bedroom” norm that he barely endured last year.

While Timothy has a couple of months left with us, he is taking a couple pre-req classes at the nearby Nashua Community College. A couple of weeks ago he signed up, had his SAT scores sent, and yesterday we settled the bill. He’ll start right after the holiday weekend.