This is just a silly post. My Chromebook has easily an order of magnitude more computational power than my cheap Pinebook. At the moment this site is authored on the humble Pinebook. My phone is what manages our home’s router. I used my phone to ask the router what the ID of my Pinebook currently is on our home network.

I launched an oh-so-boring Terminal application on my Chromebook. Inside the plain Terminal I used ‘ssh’ (the Secure Shell program) to launch a text-mode only session connecting to my Pinebook. It was the Goliath computer getting work done on the smaller David system. Once logged in with that Old School charm of yesteryear, I launched ‘tmux’ – the terminal multiplexer. It can give the features most of us like in our graphical environments: namely multiple things running at once. That can include multiple virtual desktops and splitting the current desktop into multiple windows of activity. All inside your boring Terminal session.

Nevertheless it’s still fundamentally just text apps. Unlike some, text mode doesn’t scare me. For some it makes them think of the classic Microsoft “Blue Screen of Death” (BSoD) of a crashed Windows PC. However I started doing serious computing in 1981. For several years after that, text mode was all that we had! I didn’t use a Macintosh – my first long term experience with a Graphical Environment – until 1989 just months before I got married.

So once I was logged in ala text-mode, I launched the Emacs application. It’s a text editor on steroids. I’ve used it since the days when I started grad school. Second only to being familiar with the command line and text mode, Emacs has been my Swiss Army Knife of computing. I had it create the text source file for this post. Soon I’ll have it call ‘Hugo’ – my current favorite Content Management System (CMS) to generate and update the web pages on the Pinebook laptop. Lastly I’ll call ‘sitecopy’ to push those updates to this public-facing site. 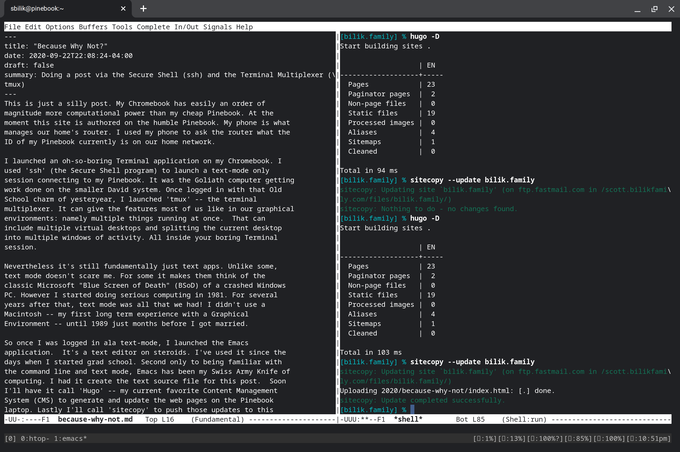 So why do it? It’s another example/experiment to show that if you aren’t a graphic artist or multimedia maven, you can do a fair amount on very little hardware. This could be one of Amazon’s free small tier “cloud computers” that you can rent from them and it could get the job done. Or you could do this on a tiny $35 Raspberry Pi – a single board computer about the size of an Altoids tin that needs just a few Watts to run.

There’s a whole spectrum of possibilities between this and a $2000 MacBook Pro for web creation. I know folks who spend hundreds on web development software. I know folks like me who use freely available solutions. On the extreme end I know hard core folks who’ve written their own from scratch. It depends on what you need to do.